Thank you to Orbit Books via NetGalley for the eARC in exchange for an honest review! All opinions are my own!

Ghoster by Jason Arnopp is a fairly long book at 496 pages, but it reads super quickly. Kate meets Scott on Tinder and then at a social media retreat, and their relationship takes off running. It seems idyllic but rushed, and 4 months later Kate is moving in with Scotr…but he is gone. His stuff is gone. His phone was left behind. So the mystery of “where did Scott go” ends up entirely consuming Kate, and gets progressively weirder as ghosts and murderers and strange entities get involved.

At first I thought it was just going to be a mystery, then there were thriller elements introduced, then the addition of ghosts and a horror/supernatural element made it all seem a little bit weird. I did like how everything was mostly tied together at the end, although I won’t pretend to fully understand what happened with that cell phone! No spoilers though, that’s rude!

So yes, the book was long but I would still recommend it for fans of thrillers and light paranormal elements. I gave it 4 stars as I was personally not so much into the paranormal part, but 100% hooked while reading it anyway. The book releases 10/22 so check it out if it sounds up your alley!!! 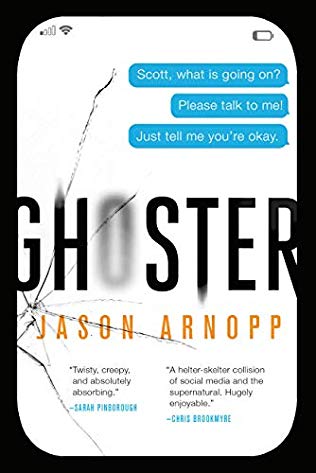 First off, a huge thank you to Berkley Publishing Group – Ace – for the electonic ARC in exchange for an honest review! All opinions are my own!

To get started, here is the summary from GoodReads:

In the first book in a brilliant new fantasy series, books that aren’t finished by their authors reside in the Library of the Unwritten in Hell, and it is up to the Librarian to track down any restless characters who emerge from those unfinished stories.

Many years ago, Claire was named Head Librarian of the Unwritten Wing—a neutral space in Hell where all the stories unfinished by their authors reside. Her job consists mainly of repairing and organizing books, but also of keeping an eye on restless stories that risk materializing as characters and escaping the library. When a Hero escapes from his book and goes in search of his author, Claire must track and capture him with the help of former muse and current assistant Brevity and nervous demon courier Leto.

But what should have been a simple retrieval goes horrifyingly wrong when the terrifyingly angelic Ramiel attacks them, convinced that they hold the Devil’s Bible. The text of the Devil’s Bible is a powerful weapon in the power struggle between Heaven and Hell, so it falls to the librarians to find a book with the power to reshape the boundaries between Heaven, Hell … and Earth.

There isn’t much more to summarize! Claire the undead librarian has a muse assistant, a demon, and a book’s Hero that end up on an adventure together to retrieve this lost manuscript that is apparently the devil’s bible. It’s a great idea, although the book felt wordy and long in places which might have to do with the fact that per the author’s note, this originally started out as a short story. Streamlined, this would have made an amazing novella or shorter book. 384 pages to cover two days is a lot of space to fill!

Other than a few swears and some fighting, this book could be appropriate for any age group. I think it is meant to be an adult fantasy but the language used and casual banter makes it seem like a younger audience was intended. Some of my favorite elements were fighting with words, exploring the other realms, and the pet gargoyle.

I like motley groups, and my favorite character ended up being Brevity, the muse. She had a lot of potential that wasn’t tapped in this book, she was hardly featured, but it looks like she might have more time in book two. She is funny and quick thinking and quite a character. Other than her and Claire, I didn’t care reading from Leto and Rami’s view points.

I also had a lot of questions such as – why are unwritten/unfinished books and other pieces of art in Hell? It seems like a punishment to put them there even if it’s neutral territory! Also what kind of weapon is the bible they were chasing, how is it powerful, and how do the different sides plan to use it? Some of my questions were answered right at the end, but not those ones! This book wrapped up fairly thoroughly but it looks like there is going to be a series.

All in all, if you like reading about books and libraries and stories, there are a lot of really interesting concepts here. The book dragged for me but I mostly enjoyed it, and others might love how philosophical it is about stories. I would rate it 3 stars and still recommend to fans of angels and demons and stories. It published on October first so go grab a copy if it sounds up your alley!

This book, this book, also this audiobook, omg SO freaking good
When you think about the canon of your favorite genre, do you feel well read? What books do you think of?
QOTD: your favorite kind of bonus content in books?
Thank you so much to @featheranddovetours and @rachel_hetrick_writes for having me on the book tour for Curse of Infiniti! I included the cover, description, and amazing inscription in the carousel for you!
QOTD: name the closest liftable object to you that's not your phone, that's what you're going to throw at me 😂
Oh man, it's May 1st already 😳 and this is my May physical TBR anyway!