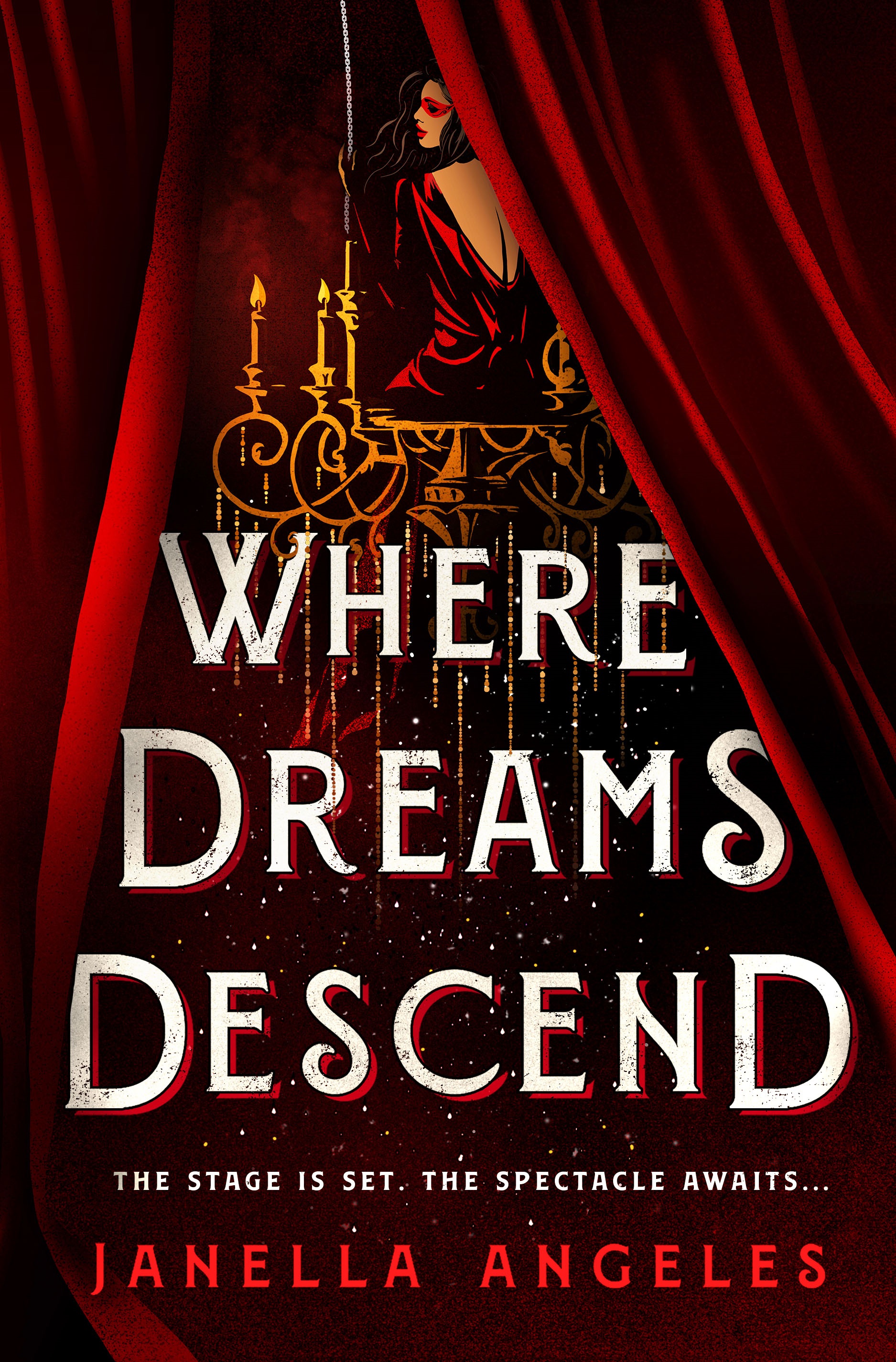 Here is the description from GoodReads:

In a city covered in ice and ruin, a group of magicians face off in a daring game of magical feats to find the next headliner of the Conquering Circus, only to find themselves under the threat of an unseen danger striking behind the scenes.

As each act becomes more and more risky and the number of missing magicians piles up, three are forced to reckon with their secrets before the darkness comes for them next.

The Star: Kallia, a powerful showgirl out to prove she’s the best no matter the cost

The Master: Jack, the enigmatic keeper of the club, and more than one lie told

The Magician: Demarco, the brooding judge with a dark past he can no longer hide

Thank you so much to Wednesday Books for inviting me to participate in the blog tour for Where Dreams Descend by Janella Angeles.  They provided a free e-ARC for review purposes.

First off, the description of this book sounded entirely amazing and I knew I had to read it.  A murdery magic mystery set against an icy world and a circus? Ok sign me up.

Lets start with the world building and atmosphere: I didn’t understand the world. There were a handful of repetitive questions being asked, over and over, about the history of the town, with absolutely no answers given. The air of mystery surrounding the world was extremely shallow because only the surface of the Town’s history was ever scratched.  The physical description of the buildings, districts, and weather were good, with literally no other world building outside of the immediate setting.  The town is described as a cold and icy place, but is it supposed to mirror the rest of the island or continent?  For all we know the island is an isolated incident of magic.

I can’t deal when authors expect the reader to be psychic – if the characters *KNOW* something, maybe we should be told that information? Jack kept saying “they” and we never know who “they” are and no one ever says what’s going on. It happened between the women at the circus a few times too. I really wanted to DNF the book at times because I think it’s just bad writing that all this mustery became boring.

The characters were not much more interesting.  Kailla wants to get out of her life as a club performer, and is determined to ruin herself in order to impress a small group of magicians in the Town in order to have an opportunity to perform.  Yes, fine, prove yourself to the boy’s club.  Her motivation seemed lackluster and overdone in such a tiny setting. Also it didn’t make sense that if women weren’t really allowed to do show magic, only work magic, why was a women in charge of the magic police? Next up, what the heck is even going on with Demarco? We read over 400 pages and literally learned nothing of substance about him until the end, and then it’s just more mystery.  Another brooding dark character who repeats his own inner monologue 500 times. I don’t love the recent YA trend of using repetition to make books longer.  Jack was another evasive twit and supposedly the villain of the piece.  The only characters I even remotely liked were the circus women, and Kailla’s assistant there who was nice and straightforward and a good friend.

I understand that the author’s goal was to create a huge mystery but if all we get is repetition and angst with no substance, it is just boring.  I also didn’t get the little bit of romance very much, it’s hard to ship two characters who are both so evasive and I didn’t really understand why brave and fearless Kailla was suddenly so afraid of Jack during the middle chapters.

The plot had a few action points but the author dropped them pretty quickly in favor of the characters just angst-ing at each other some more. I won’t lie that I ended up skimming, a lot.

If you liked the Night Circus – lots of words amid a tiny bit of action action and a little playing hard to get – you’ll probably love this.

I believe the duology is redeemable in book 2 which is why even though this is a harsh review, I believe it is appropriate for the tour.

Thank you again for allowing me to participate in the tour and bring you this book which releases on 8/25!

JANELLA ANGELES is a Filipino-American author who got her start in writing through consuming glorious amounts of fanfiction at a young age—which eventually led to penning a few of her own, and later on, creating original stories from her imagination. A lifelong lover of books, she’s lucky enough to be working in the business of publishing them on top of writing them. She currently resides in Massachusetts, where she’s most likely to be found listening to musicals on repeat and daydreaming too much for her own good. Where Dreams Descend is her first book.

This was one of my most anticipated releases of the year. I like the night circus but your review makes me think that I don’t want to read this.

Sorry it fell flat for you. I’ve not read either of these. I don’t have much input other than it sounded really interesting from the synopsis like you said

It did sound amazing, made it even more of a bummer. It’s like crown of feathers or wicked saints, potentially great storyline and sooooo much filler

Ahh sorry you didn’t like this! Your throwaway comment about the Night Circus makes me hopeful tho. I know it’s not everyone’s cup of tea but it’s one of my all time favourites😂😂

That is surprising! I felt like The Night Circus promised a fight but literally…. Prose prose prose and not much actually happened. You might love this one except Morgenstern, if nothing else, can write a bit of prose

I liked this more than you did but ya, there was a bit of confusion. My review posts next week.

I feel like it’s not even confusion as much as just either lazy or bad world building. Nothing in the world makes sense in a wider context than her story line

“literally no world building at all except that a mystery and lack of history exists”
Oof that hurts, it’s hard to read a book where I can’t get immersed into the world.
I’m a fan of a good mystery, but it sounds like this book is all mystery and no conclusions. Hopefully the next book makes up for it!

So I couldn't stop reading after book one, and One Dark Throne by @kendareblake was my first read this month!
Have you read any of the new releases coming today, or are you planning to??
Thank you so much to my #partner @dartfrogbooks for the review copy of Supplant by Shane M. Toman!
Happy Sunday! Are you ready for the new week and month?
I was on an indie author roll this month, and one of the books I read was The Star by @cwarnerthompson !
Since book club chat is rapidly approaching, I feel safe posting my thoughts! Are you in a book club? Do you like buddy reads?